“Hey! You guys need to quiet down in there and get some shut-eye.” My dad grumbled as he stuck his head into the teepee, “I don’t want to have to come back here again. It was ‘lights out’ over an hour ago.” We listened to the faint steps in the grass as he walked away. The snickering continued among the members of the Flaming Arrow Patrol of Troop 704, but nobody wanted my dad to come back again. We finally trailed off to sleep.


I grew up in a camping family, and was eager to progress from Cub Scouts to Boy Scouts in 1962. My older brother was already a high-ranking scout. As a young boy, I concluded that my dad’s master plan was to be a leader in the scout troop so that he could keep watch over my older brother and me.


We attended weekly troop meetings and were given handbooks to read, but the most fun of being a scout was going on the campouts. Our troop was unique because of the large teepees we used instead of tents. It was possible for an entire patrol of eight to ten boys to sleep in one teepee, with its huge, circular base. The troop camped in Colorado every summer to collect the tall pine poles for the teepee frames. When it was time to add another teepee, some of the mothers sewed the canvas, patterned after the real teepees used by  Native Americans. We painted each teepee to identify the patrol. Ours had a flaming arrow, but others had bears, wolves and other insignia adorning the canvas.


As I think back to my scouting days, I realize it was a great experience to prepare me for life after childhood. Immediately, it taught me how to work with other people and I became aware that we all have different attitudes and behaviors. Before every campout, we had a patrol meeting to plan a menu, buy the food, and calculate the cost for each person. We also planned activities that were designed to help us advance up the ranks. With the scout leaders watching us, we packed and repacked our camp gear, using checklists to confirm we had all that was required.


But all the planning in the world couldn’t hold back the unbridled enthusiasm and sense of freedom unleashed in each scout when we pulled into a campsite. As the teepees were unloaded and erected, many of the troop members were already exploring the area, throwing rocks in the creek, playing tag in the woods or finding good walking sticks. I quickly learned a life lesson of trying to keep some sense of order and sanity during the chaos that ensued, and found that I could have some fun mixed in with the chores.


I have fond memories of waking up to the smell of bacon on the campfire, then tossing a football around the campsite after breakfast (this was before frisbees were invented). The camping days were filled with hiking, swimming and numerous other activities. After a big dinner, each patrol would plan a skit for the evening campfire, which was a big bonfire that tended to hypnotize all of those gathered around it. I’m sure Mom enjoyed the peace and quiet at home, but when we returned she ordered us to pile all of our smoky-smelling clothes in the garage, then strip down and go take a shower.


During my first time at summer camp in Colorado, our troop went on an overnight survival hike. I was the lowest rank, a Tenderfoot, and every experience was new. Our five-mile hike followed a pipeline that was being installed in the national forest. In the heat of the afternoon, I began to choke on the dust. Blisters formed on my feet from negotiating the clumps of dirt along the pipeline trench. It seemed as if the hike would never end, and just as we arrived at a remote campsite in the lodge-pole pine forest, the typical afternoon deluge in the mountains began. Ponchos were pulled out of the packs, and we hunkered down under the trees.


I was exhausted, but it was time to fix supper, which required us to boil water for dehydrated soup and beef stroganoff. Before the hike, we were each issued two matches to carry in small waterproof containers. My two buddies and I tried to get a fire started, but all we could find were wet branches and sticks. In our foolish desperation we used two matches at once on our final try to get a lasting flame. With our matches gone, we approached our scoutmaster, Mr. Lein, and told him that we had failed. Oh, the shame.


Mr. Lein was not upset. He kindly showed us where to snap the dead, dry twigs from the lower trunks of the pine trees. He configured the twigs into a small teepee and lit them with one match. Although I was glad to see the fire grow, I was exhausted, and tears began to well up in my eyes. I felt even more embarrassed, as we huddled around the fire. Mr. Lein, noticing my predicament, poked me softly in the ribs and matter-of-factly commented, “That darn smoke gets in your eyes sometimes, doesn’t it?” After supper we built shelters with our ponchos and pine boughs. I slept well that night.


The next year in Colorado, one of the activities was a one-day, ten-mile hike to the summit of Mt. Ouray, a big mountain just shy of 14,000 ft. in elevation. I felt more like a veteran as I began the trek with five leaders and twenty boys after breakfast. We hiked for a couple of hours through the woods, then the path became rocky and less visible as we rose above the timberline. The cold wind and the ominous clouds forced us to put on our ponchos while we wolfed down our cheese sandwiches and apples.


The giant boulders and rock towers to the side of the ridge to the summit became our shelter from the wind and sleet as the storm blew past. I remember feeling quite small as the lightning flashed and the thunder shook the ridge. Once the rain stopped, we continued on, but many of the leaders and scouts had turned back, due to altitude sickness and the weather. Just six scouts (including me) and two leaders continued to the top of the mountain. When we got to the summit, I thought I could see all the way to Kansas.


My scouting path took me many places, from the boundary waters of Minnesota and Canada to the slopes of the mountains in southern Colorado, where I worked on the Spanish Peaks Scout Ranch staff for the first year of operation in 1967.


My brothers and I thrived in the scouting program, and we each obtained the Eagle rank. Although it is a significant achievement, I believe that by the time most scouts have the Eagle medallion pinned on their uniforms, they have learned that the process of learning will continue for their entire lives.
In 2007, I was returning from a business trip, flying back to Kansas City from California. I was worried about my dad, who was ill, and I was anxious to get home and drive to Wichita to see him. As a scout, I loved to look at maps and use them to determine my location. Many times while looking out the window of an airplane, I used those skills to identify certain features of the landscape and the cities below. That day was no different. The clouds over the Rocky Mountains were few, and I viewed the San Luis Valley below. Quickly, the jet flew over Mt. Ouray and for a few seconds I spied its summit where I had stood decades ago. I looked down on the vast forest of lodge-pole pines and remembered the long, exhausting hike. I also remembered the time Dad woke us up one night at the Mt. Ouray camp to see the beavers at work on the nearby ponds. With child-like excitement, he rustled us out of our sleeping bags to show us the beavers swimming and splashing in the moonlight. “Look, there they are!” he exclaimed as he pointed his battery searchlight at them.


The jet landed in Denver and I checked my phone messages while waiting for the plane to continue on to Kansas City. A message from my brother asked that I call him, and when we talked, he gave me the hard news that our dad had died within the hour. I realized that I had been looking down on Mt. Ouray about the time that Dad had passed away. The flood of memories came back to me.


Dad helped lead the troop for countless years. I realized that he volunteered as a leader because of his love for scouting and for each of the boys, including me. Now he was gone, but a smile came to my face. Dad and the other leaders taught us the scouting skills, and they taught us how to live, too. I’ll keep using those skills the rest of my life.
Posted by Greg at 1:59 PM No comments: 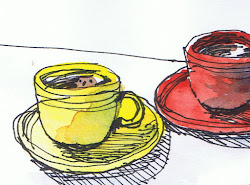